So it’s late Sunday afternoon at Soldier’s Retreat and I’m coming down off of the high that was the awesomeness of Mysticon 2013. Finally got to meet Col. Tom Kratman in person, which was a hoot, because that man can tell a story. Had to keep it relatively PG-13, however, due to the underage midgets in the room.

Okay, so on to the convention after action review.

Left Lexington on Thursday since I wanted to be relatively fresh at the con for the following day, so I made a beeline for Casa Boyd. Got there, I think I had a salad and promptly crashed. Hey, cut me some slack. I’d just driven 6 hours and I’m not used to seeing that much daylight.

Trooping through the cold wastelands of Vur-gin-ya, our intrepid hero marches on.

Friday I rolled in to Mysticon around 3 or so. I didn’t have a room (I stayed with friends in town) but that wasn’t going to stop me from doing what I do best — party crash. Unfortunately, I found out later why I couldn’t seem to find any sort of room party whatsoever. 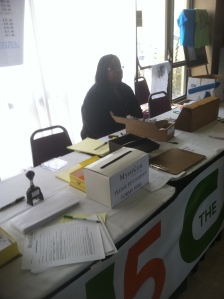 The line for attendees started here. These volunteers worked their tailfeathers off the entire weekend and really deserved a prize.

Anyways, the con has tripled in size since the first year of existence, and with the concom working their tails off to keep up with the  sudden influx of attendees. With the Author Guest of Honor being Orson Scott Card and the Media GOH Peter Davison, you could say that there were a lot of people.

So there I was, trying to figure out what I was going to do next, when suddenly someone told me that the dealer’s room was open. Since the con hadn’t really started yet, I was a bit surprised. But I sauntered in anyway and saw that, despite a lot of vending booths, there wasn’t a lot of things I could see myself wanting. However, I did score a comic book from Travis Surber (author/artist of Hainted Holler), as well as a Dr. WHOrse. Seriously. It’s freaking awesome. 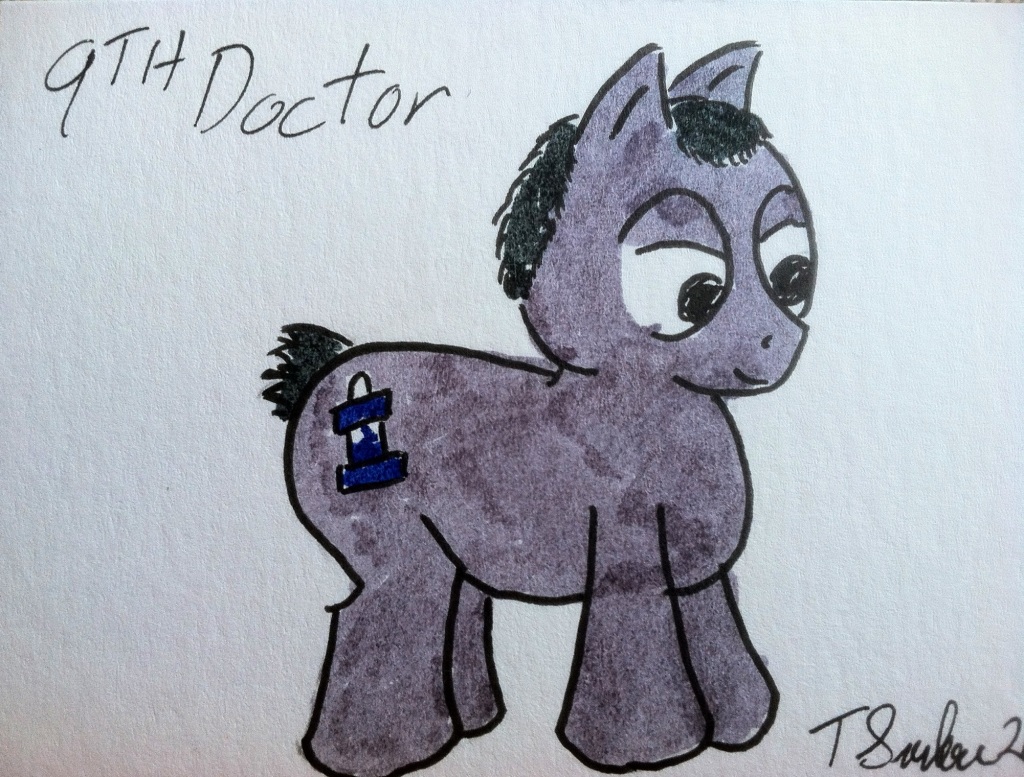 The really freaking awesome Doctor WHOrse, by Travis Surber, and it’s all MINE!!! Muwahahaha!

I did run into Mark Morgan, who is a villain in Corruptor. He gave me permission to use his name, and so I made him an awesome villain. He’s a nice guy though, even if I portrayed him as a money hungry, greedy little cyber terrorist.

My first panel came up and I had almost as many attendees as panelists. I was prepared for this, however, since I’ve noticed that my panel attendance grows throughout the weekend as more and more people discover that I’m actually a little funny at time. But I discovered quickly on this panel (Genre Mashups) that a select few people were more eager to sell their book than talk about the topic at hand. Again, I’m used to this, so I quickly decided to make the audience laugh at me (note: not with me, but at me. I sacrificed myself for the greater good), and this killed the self-promo bid and got the panel back on track.

After the panel ended (thankfully, nobody was killed during the making of the panel) we headed up to the con suite. There we saw the ultimate in cake design: The TARDIS, in cake form, complete with a working light and sound effects.

Sufficiently impressed, I headed back down to my next panel, Law Breakers or Makers, where we would proceed to talk about how all of us follow our own universe’s rules and a pox upon the household that breaks their own rules. Oddly enough, Stephen King came up once or thrice. No idea why **coughNeedfulThingscoughcough**.

Afterwards I went back to my friend Peggey’s house and crashed there. Was exhausted, but a fun and successful Day One.

Day Two began with me oversleeping. Yeah, still not entirely used to be awake in the daylight, but needs must and all that. I soldiered on and, after a quick bite to eat, headed back to Mysticon. I was hoping to find some room parties to go to that night, and hang out with some very cool people after my last panel (the infamous Iron Author) was completed. I found Tom Kratman, Andrew Fox (author of Fat White Vampire Blues) and Clay White (with his son, what’shisface) just by hanging out at the con suite. I figured my odds were good at meeting Orson Scott Card there (didn’t even see him all weekend… our panels never coincided), but alas the odds were not in my favor.

Note to self: do not live in District 12. I’d be screwed.

Went to the Baen Traveling Road Show and scored a free book (John Ringo’s Tiger by the Tail) and finally met Laura Haywood-Cory in person. Ran into Leon and KatieKat while I was in there, and dinner plans went astray when I went to the hotel restaraunt and they went elsewhere. That was okay, except for the fact that my dinner came five minutes after left and I had to get it delivered to my next panel, which I was almost late for.

My next panel, Kill ’em!, was a lot of fun and I got to share how I killed one character not once, but twice in the same book series. This was met with some skepticism until I explained the way to properly nuke a grave from orbit. After that, everyone was on board (as well as feeling sorry for me, since previously mentioned character is based on someone) and the audience was really into it. Tony Ruggiero (author of the Immortal Servitude series) did a great job at balancing my relative insanity, and we all agreed: no character is sacred.

George R. R. Martin would have loved that panel.

Afterwards I scarfed down my dinner and met Peggey, David and Ellie as they were preparing for the Masquerade. Ellie was a Weeping Angel from Doctor Who, and a very good one at that. She won a prize (along with the mini-Dr Who and the mini TARDIS — all kids who were under 10 and dressed up like Doctor Who) and I took a few pictures of them. 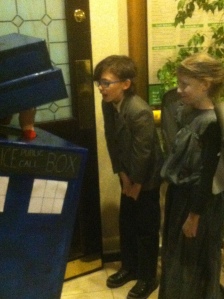 Mini TARDIS with mini Doctor Who and mini Weeping Angel.

Afterwards it was time for… IRON AUTHOR!

This is something I had never done before and was eager to try it. However, as soon as the words “Disney Stunt Cock” were thrown out there, I knew I was doomed. 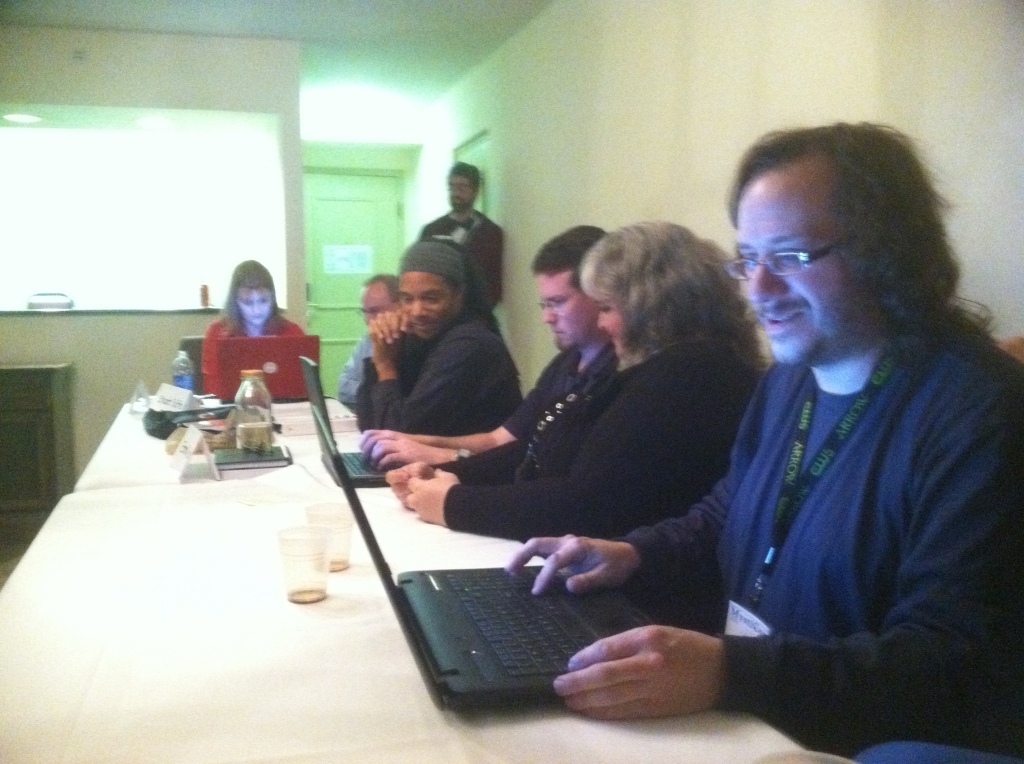 The sick and twisted authors of IRON AUTHOR. Not featured (aka hiding) KT Pinto and myself.

…so skipping over specific details…

Thought about going to the Bella Morte concert after the last panel but by then I was exhausted. So I staggered back to Peg’s and fell into bed, remembering to set my alarm since I had a book signing at 10 the next morning.

Made it to the book signing on Sunday with about 3 minutes to spare. This was my singular complaint about the weekend — why in the world do you schedule the younger authors to do signings at oMG in the morning after a Saturday night? Sold my last copy of Lawyers in Hell and talked to the amazing Amanda Carruba about potential book covers later on down the road. Ran into Brandy and Derek Spraker (they who run Libertycon) and had breakfast with them, which was nice because they are absolutely awesome people. Ran into a few more familiar faces (sorry if I can never remember your names. Really!) and then called it a day after making one last journey through the Dealer’s Room.

I have to say, even with the massive amount of people in the con, it was a fun time to be had. I was able to duck away from the larger groups with some ease and find some quiet time to myself, which is important if I want to keep my sanity. I also was able to meet some new people, sign a book that someone had purchased at a con in Texas and came all the way to Mysticon just for me, and reconnect. 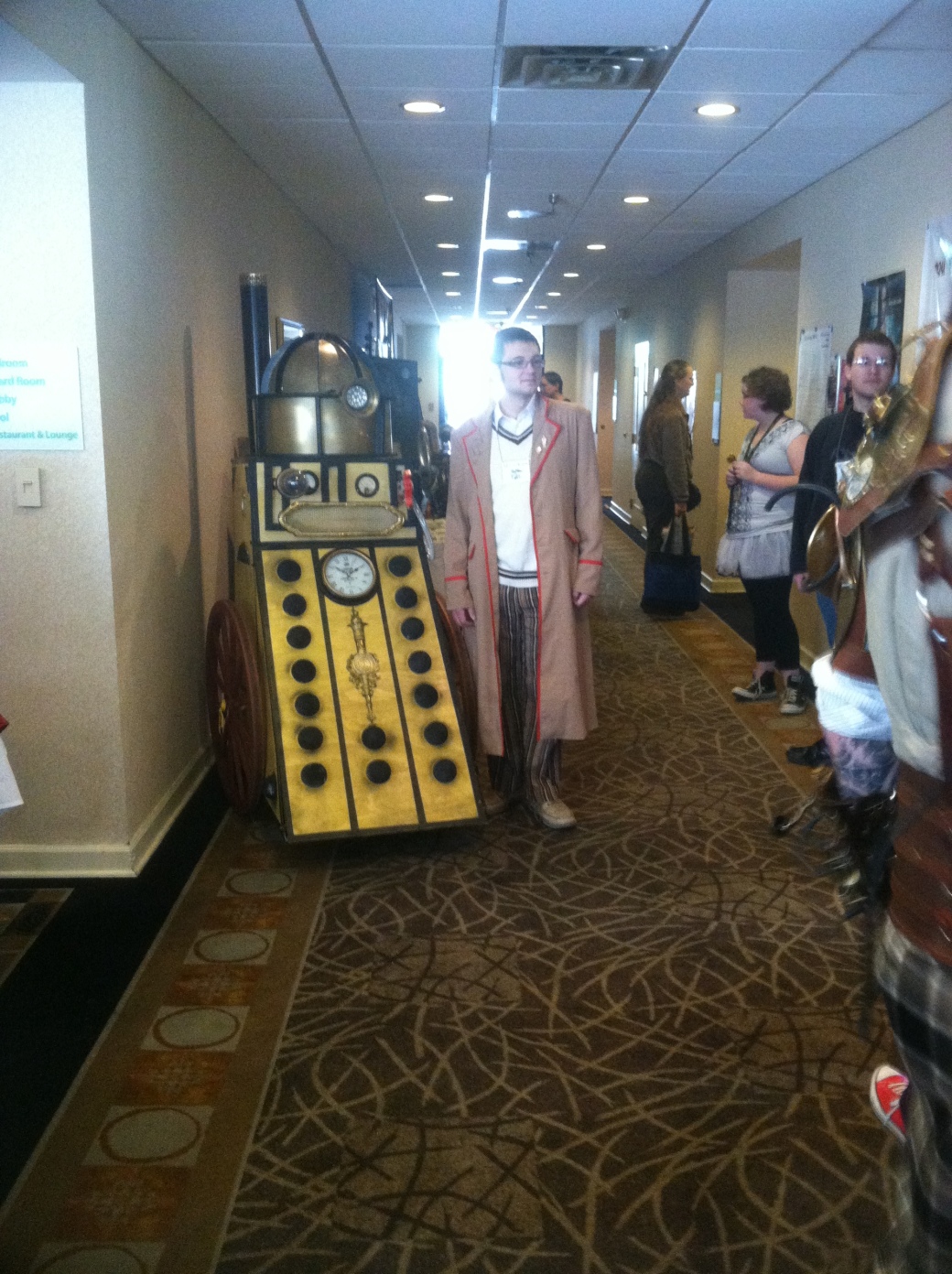