Growing up in group homes, I never had a pet of my own. In retrospect it’s understandable, because most kids aren’t in one particular location for a long time. Back then, however, I was angry and mad that all the other kids talked about their pets at “home” (most of the kids were in the group homes for short term, while I was a long term kid). I got a cat when I was 13 and in my first foster home (Max is awesome for letting me get that cat), and the world was just that awesome. Of course, as I learned later in life, a cat is definitely not a dog.

Sophie arrived at the Roanoke Valley SPCA in September of 2013. I don’t know why her former owners surrendered her, but I was just glad that this extremely friendly dog was interested in me. I wasn’t sure how well she’d do with cats, but I figured that Casper and Wally would be able to adjust having a 100 pound beast in the house (they did… eventually).

She was with me for 6 books and numerous short stories. I named a character in a book for her. She was an amazing puppy who just wanted to be on your lap and be told that she was a good girl. She was also an extremely smart dog who was able to speak on command, begged better than anyone, and was very interested in those Twix candy bars that were oddly placed in the cat’s litter boxes. She was protective of the house and her own, and she was loyal to the end.

In the end, health problems were the end of her. She was almost 6. Too young for a dog to develop cancer and hyperthyroidism. My baby dropped from 100 pounds to almost 70, and the vet agreed that, barring prednisone injections that might give her an extra month, that putting her to sleep was the best thing to do.

I didn’t want my loyal friend to be in pain any longer, so I agreed.

I’m mad, though. I’m mad that I only got 2 years with my dog. Mad because she was my first dog, and a boy should be be able to spend many years with his dog.

Goodbye Sophie. I’ll see you on the other side. 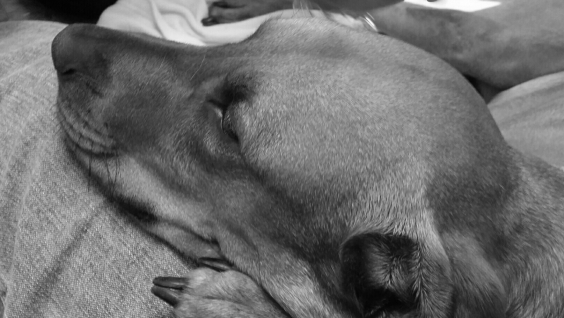 You were a good girl.